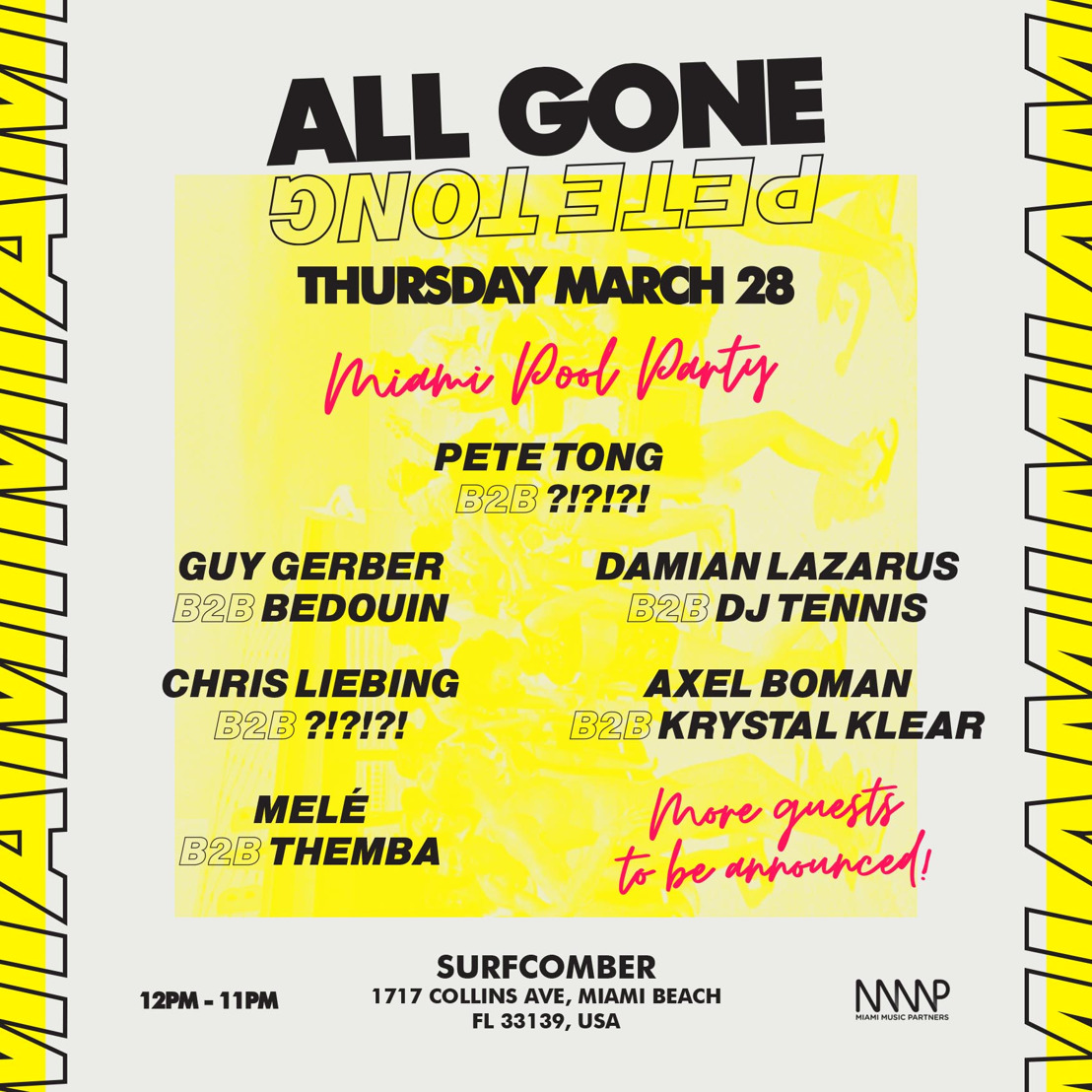 This longstanding event series has graced MMW for the better part of the past decade. Legendary BBC Radio 1 Broadcaster and master curator Pete Tong has hosted his can’t miss event, presenting the biggest stars and hottest emerging talent along with can’t-miss surprise sets. Last year saw the debut of Black Honey (The Black Madonna B2B Honey Dijon), the Italian legend Joseph Capriati team up with NY House sensations the Martinez Brothers, South Africa’s most prominent DJ Black Coffee go head to head with Style magnate Virgil Abloh, and progressive stars Kolsch and Tiga grace the stage as one. Backstage serves as the ultimate industry hangout spot, where label heads, managers, DJs, promoters and the who’s who of dance music all congregate for an impromptu summit under the Miami sky.

This year, Tong continues his tradition of featuring all B2B sets at the event, allowing for one of a kind collaborations you couldn’t find elsewhere. Israeli DJ and RUMORS founder Guy Gerber will square up with the idiosyncratic flyer superstars Bedouin. Two giants of the underground, Crosstown Rebels’ Damian Lazarus and Life & Death founder DJ Tennis, join for an eclectic mix of the undergrounds’ finest musical offerings. The Swedish tastemaker Axel Boman goes B2B with Ireland’s top talent Krystal Klear, who’s breakout track Neutron Dance earned Pete’s praise as “biggest dance song of the year”. Continuing the tradition of surprise guests, German Techno pioneer Chris Liebing and Pete Tong will pair up with unannounced B2B partners. Two of 2018’s brightest up-and-comers Mele and Themba will round out the lineup with a diverse mix, drawing inspiration from their respective hometowns of Liverpool and South Africa.

Additional pairings to be announced in the coming weeks. Watch this space for more news.

2018 was yet another big year for Pete Tong, celebrating 25 years of his iconic mix series The Essential Mix on BBC Radio 1. Pete also brought back his seminal orchestral show Ibiza Classics, which sold out two nights at the O2 Arena for the second year running. Ibiza Classics will return December of 2019 for a limited run of 9 shows throughout the UK.